The Government of India provides pensions to differently-abled citizens of India. This is a powerful welfare program which ensures that they are supported by our society to live with dignity.

Process: The first step into utilizing any of these welfare programs is to obtain disability certificates. Disability certificates are documents provided by our government which quantifies a person’s disability. A medical board comprising 3-4 experts sits at every district hospital once a week. They screen citizens who claim to be differently-abled and provide a number in the range of 0 to 100 to each such candidate. In cases where the board concludes that the person’s condition is fixable, no number is provided and instead, interventions like physiotherapy and medication are prescribed.

Any citizen who feels s/he deserves such a certificate is free to submit an application and get her/himself evaluated by such a medical board. The documents required to submit such an application are simply a proof of residence and two passport sized photographs. Seva Setu helps mobilize people who’re unaware of this process and facilitates this process for them. 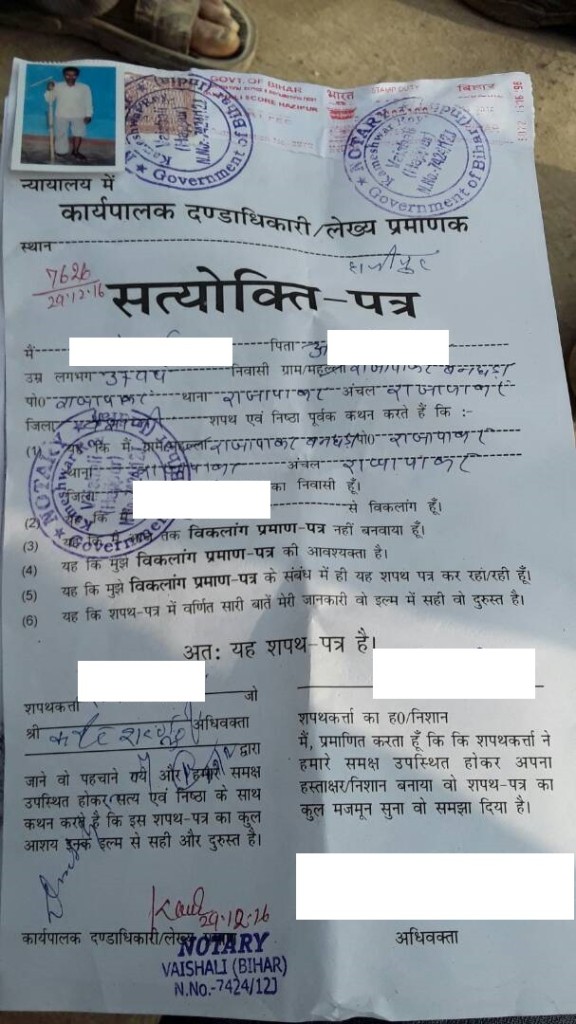 We strongly oppose this requirement for the following reasons –

An artificial requirement: This is not mentioned in the circulars sent out by the Ministry of Social Justice and Welfare. which state the requirements clearly (see image). Neither is it enforced consistently. Some district hospitals, such as the one in Patna, do not ask for this requirement. Moreover, we oppose the justification in having such an affidavit, to begin with. The affidavit requires a person to attest that s/he indeed is differently abled, is in need of a certificate, and promises that s/he has not applied for such certificates before. The first two points are facts which the medical board would eventually evaluate and ascertain. The third does not really demand a sworn affidavit. A self-attestation should also be equally valid. In fact, Delhi’s High Court only recently removed the requirement of affidavits completely! 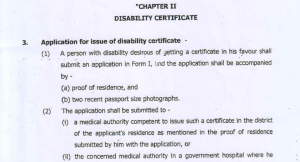 A financial burden: More importantly, it is a significant financial burden on citizens. The process to obtain a disability certificate, and thereafter obtaining pensions is certainly an involved one. A beneficiary ends up visiting the district hospital at least 3-4 times before s/he finally receives her/his certificate. Each such visit costs INR 200 to and fro, considering that the person typically travels from far off blocks/taluks of the district to the district hospital. An additional requirement in such a case is the affidavit, which costs upwards of INR 200. At Seva Setu, we have spoken to multiple notaries to get them to charge a “nominal” fee of INR 190 to people we facilitate. But any layperson visiting them is charged between INR 200-300.

A complicated process: Those not being facilitated by an organization like ours go through a hard time getting their work done. Nowhere is this requirement clearly mentioned at the district hospitals which impose this. A person has to ask around to figure out the requirement. Once figured out, the affidavit creation process is generally not even in the premises of the hospital. One has to travel to a court-house complex or any such public administration office to obtain such a document. All this is to be done in a time interval of two hours – the window that’s provided by the hospitals to accept applications for disability. Past this interval, beneficiaries have to wait a week to try the same process again.

We, at Seva Setu, are trying things on multiple fronts to quash this seemingly artificial requirement. We have seen success previously in this regard – late last year, we had worked with the district hospital in West Champaran and got the Civil Surgeon (the highest authority in a district) to quash this requirement. But this happened thanks to paperwork initiated by organizations who had worked in this regard much before we realized this issue, making our job easier. In our current effort to quash this requirement in Vaishali, we have written letters to the Civil Surgeon, are in the process of meeting him in person and have also raised this issue with Bihar’s public grievance redressal system. We will keep our readers posted on our progress in removing this requirement.

Meanwhile, in our series of posts on our on-ground advocacy efforts, we shall discuss other discrepancies we face in our day-to-day operations. Stay tuned!