September 1-7 has been declared as the National Nutrition Week in India. As highlighted in our previous post, Seva Setu takes this opportunity to convey to a larger audience some notes on how we have engaged in this fight against malnutrition.

NRCs – how to empower them

In our previous post, we spoke of the challenges in the functioning of the Nutrition Rehabilitation Centers. We discussed four key challenges in its 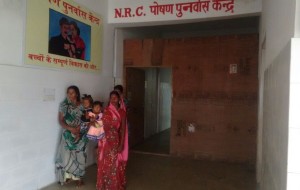 All four issues, when looked at closely, hint at a common root – a sense of unfamiliarity which an inaccessible service breeds. If it were a service being provided right next door, one wouldn’t have to bother about operational worries such as having to travel and stay at an unknown site while not having a grip of one’s home. From what we have seen, we strongly believe that if the whole NRC model is decentralized and if location and accessibility is preferred to capacity, it would make this one very compelling model of change. For instance, dedicating one ward (containing around 5-10 beds) in each Primary Health Center (PHC)(which is located in every block – a block being a collection of 10-15 panchayats) could be a first step into having a practical solution for these concerns. This way, parents could be given an option of visiting the clinic everyday for an hour or so after the first two-three days of getting them to stay over at the clinic. Such a model would hopefully ensure a higher utilization of this service and will also be easily marketable to the residents of nearby panchayats.

Dedicate a 5-10 bed ward at each PHC to handle cases of malnutrition instead of having one clinic per district. A dedicated clinic should not handle all cases of diagnosis and care. Instead, have them for only specialized treatment and tertiary care.

As far as the matter of relapse is concerned, the problem of such a monitoring mechanism reeks of a technology-based intervention. Having a phone-based monitoring system is a sure step towards ensuring beneficiaries of this program are kept in touch with and monitored closely. Having such a system will also act as a forcing function to ensure patient-data is available in a format where such electronic tracking is made possible. Skeptics might call this far-fetched, saying it would be just another useful sounding system on paper. To prove them wrong, we at Seva Setu embraced technology in such monitoring and intervention tasks long ago! Our mother care program has a fully automated system that anyone can be a part of which helps young, pregnant mothers in rural India enjoy a safe motherhood. Check out the nifty system here!

Have a technology-driven monitoring system. This will force the system to have digitized data, making it amenable for further monitoring and analysis. Seva Setu has set up one such system in its Mother Care program.

We aren’t the first to be enlightened by these simple yet effective interventions at ensuring the existing system works better. The concept of decentralizing the role of the NRCs has been acknowledged even by Doctors without borders (Médecins Sans Frontières) in Bihar’s Darbhanga district. Referred to as the Community Management of Acute Malnutrition model, the program shifts the onus of primary care for malnutrition to the PHCs and ensures that there’s more door-to-door monitoring that happens to avoid relapse. They don’t adopt a technology approach towards relapse prevention – a step which can easily be integrated into their current model. Go through their full study here.

This idea has also been embraced by the bureaucrats who have designed Bihar’s Integrated Child Development Service’s Program implementation plan for the year 2015-2016. Recognizing the problem at hand and with an aim to fast-track bringing down the malnutrition rate in Bihar below the 30% mark, the government had in 2014 instituted the Bal Kuposhan Mukt Bihar (BKMB) campaign. As part of the 2015-16 efforts, the government has planned on implementing Sneha Shivirs (nutrition camps). One such camp would be setup for every 4-5 Anganwadi centers and will run for a period of 30 days – the first 12 days would involve feeding the malnourished kids along with sensitizing the residents of the issue, which would be followed by 18 days of door to door monitoring of children’s health. This promises to result in close to 40,000 such camps being organized throughout Bihar. The idea again is to make such care and service localized and accessible. The success to such camps would be its execution month on month for a good period of time, which does not seem to be part of this year’s implementation strategy. This year’s plan speaks of only one such camp being held at the centers with a proposal to scale operations up based on the results of the pilot. Read the year’s implementation plan here.

Role of the media

While having mentioned these suggestions and tweaks to existing programs, one must not forget the role of the media in directing a nation’s conscience towards this pressing matter. We have seen media campaigns go viral in the past (e.g. the Pulse Polio campaign) which have made topics of importance a household name. Even if the layman does not understand the nuts and bolts of what an issue is all about, the fact that it plays on every TV screen and is the “trending topic” usually brings it into the realm of coffee table conversations. Unfortunately for us, the media has failed to pick up malnutrition as one such topic. What the nation seemingly wants to know this week is how rains have inconvenienced a visiting dignitary or how the vision of digital India is being fulfilled by a telecom operator. Debates and discussions around malnutrition, which the nation ought to know about, are missing. When we looked around, we found very few mentions of it in the popular media, most covering vegetable carving ceremonies to mark the national nutrition week! [link] If this is the seriousness with which this dialogue is carried forward, we are simply a long way away from being anything close to a nation conscious of a problem destroying its infants.

Addendum: The Times of India has carried out a piece on 6 September 2016 on the seriousness and extent of malnutrition plaguing our country. This was the only piece we could find which covered this issue.

In our subsequent post, we shall talk about other programs by the government and the prevention mechanisms which can help in addressing this issue in the long run. Help spread the word and stay tuned until then!