We first met Babli when we were associated with World Health Partners to ensure that drugs to check TB were being consumed in a timely manner by those fighting it. Babli had seen Seva Setu’s active involvement in this program and had walked up to us asking whether she could be a part of the action. A couple of discussions later, she was on-board, active as a field executive.

On having worked actively on monitoring the government’s VHND programs and getting malnourished children from her neighborhood admitted to the local Nutritional Rehabilitation Center (NRC), she took up Seva Setu’s Skill India program and helped set up stitching centers in three villages in her panchayat. 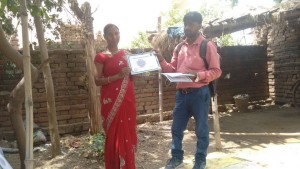 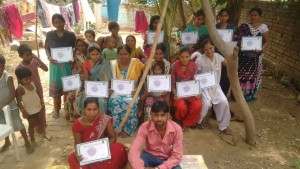 Babli and the team she helped assemble to get trained in stitching.

Babli today has a vision for where she wants to see her village in five years’ time. Her stint with Seva Setu has exposed her to a number of ways in which women and children from her village can live healthy lives and also double up as income generators for their respective households. Setting up a robust drainage system, connectivity to nearby towns through well-connected roads and ensuring each house has a toilet are a part of her immediate action items. We are pleased to aid her in setting up the initial capital in getting some of these projects started off.

We see a fantastic opportunity to help the Bablis of tomorrow. At Seva Setu, the range of activities we involve ourselves in, invariably exposes our field executives to the various pain-points the common man suffers from. Additionally, our model also shows through actionable work on how some of these pain points can be circumvented. The hope and aspiration we see in Babli’s eyes fuels our drive to be the “setu” we envisioned to be – between those willing to serve and those who cannot help themselves.

Pleased to hear about Babli? Want to meet many others on the ground who are as active and determined to bring about a change? Want to lead a team of such spirited individuals into building something worthwhile? Drop a note right away – we’ll be happy for you to be involved!